Start a Wiki
The Girapedia is the in-game encyclopedia that contains images, size information, coin per second statistics and brief descriptions about Giraffes. Entries are unlocked as each creature is mutated. The game needs to be reset several times to unlock all of the entries. 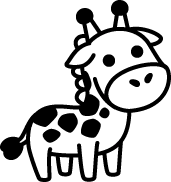 Retrieved from "https://giraffe-evolution.fandom.com/wiki/Girapedia?oldid=4885"
Community content is available under CC-BY-SA unless otherwise noted.